The Munich Mineral Show, in October 2018, hosted a joint exhibit involving the gold nuggets from the Williams Caerhays Mineral Collection and the Sky Disc of Nebra, a 3600 year old Bronze-age astronomical disc used to determine the seasons for sowing and harvesting in the Halle area of Saxony-Anhalt, Germany. It is believed to be the only known example of its kind. The disc, first discovered illegally by two metal detectorists on a protected archaeological site in 1999, was acquired by the State Museum of Prehistory in Halle, Saxony-Anhalt in 2002, Professor Harald Meller, director of the Prehistory Museum securing it for the State after a sting operation was carried out in Basle. 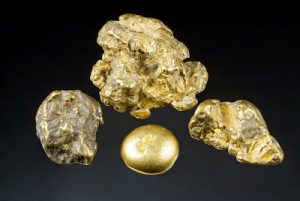 Since 2008, Courtenay Smale, the curator of the collection has been involved in recreating a display of the former Williams family mineral collection as part of the House Tour at the castle. The original collection had been part of the Scorrier House collection, created by John Williams (1753 –1841) and was transferred to Caerhays c. 1863 after the Caerhays Estate was purchased by Michael Williams, his son, in 1854.

In 1893 John Charles Williams, the owner of Caerhays gave away most of the collection to the Natural History Museum and a number of other beneficiaries, retaining a small selection at Caerhays. For some reason the retained minerals were secreted throughout the castle, which, since 2008, has gradually given up its hidden treasures. This was at a time when Cornish metalliferous mining was in severe decline and John Charles Williams’ interests lay with plants, culminating with the creation of the Caerhays gardens.

In 2011 the curator discovered a cache of some thirty gold nuggets, secreted in a drawer with other family memorabilia. Just as most of the mineral collection had been unlabelled and uncatalogued, the gold nuggets bore no information as to their origin. A cursory examination at the time indicated that some of the nuggets, the heaviest weighing over 10 grams, contained cassiterite (tin oxide) grains. This combination of gold with tin in an alluvial, or placer deposit, together with John Williams and partners (the partners most probably being his sons) working the Carnon River alluvials on a 21 year lease from 1803, suggested that the likely source of the nuggets was the Carnon Valley.

In 1851 John Murray wrote in his ‘Handbook for Travellers in Devon and Cornwall’ that ‘Scorrier House, seat of the family of Williams is known for containing a valuable cabinet of minerals, including several large pieces of Cornish gold’.

Searching the literature for information on Cornish gold, the curator came across a research project which aimed to determine the source of the gold in the Sky Disc of Nebra. After finding no matches in mainland Europe the project turned its attention to Britain. A telephone call to Professor Gregor Borg, of the Martin-Luther University in Halle-Wittenberg, Germany led to him visiting Caerhays in May 2017, during which time analyses of the nuggets were undertaken. A subsequent visit to Halle by  Courtenay Smale allowed further examination and photography of the nuggets to be carried out in the Economic Geology and Petrology Research Unit.

The outcome of this protracted research culminated in matching the ‘fingerprinting’ of the gold in the Sky Disc of Nebra with that of gold from the Carnon Valley. An antler pick discovered in the Carnon Valley alluvials has been proven to be of the same age as the disc.

The Munich exhibit was a joint one, involving the gold nuggets from Caerhays, Cassiterite alluvials, and a replica of the Sky Disc of Nebra (the original disc rumoured to be insured for 1,000,000 Euros).

Attendance at the Munich Show was around 40,000 over the three days and the exhibit created a considerable amount of interest from the general public and professionals alike.