Iris for RHS Plant of the Year? 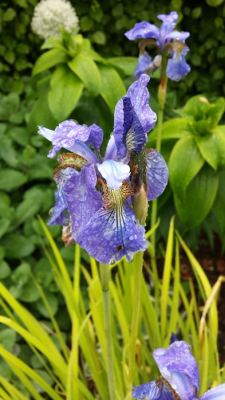 The unique bright chartreuse yellow spring foliage will brighten any garden for a full four months from March to July.

The stunning blue flowers, emerging in late May, last for several weeks and are excellent for bees.

The history of the creation of this new plant does not involve plant genetics or plant breeding by specialists in laboratories. It has far more mundane beginnings in Jim & Fran Clarke’s garden in Co. Kildare in Ireland. Jim & Fran were nurserymen at Johnstown Garden Centre by profession before their retirement and therefore had an eye for the unusual. They spotted a single bright yellow shoot on a clump of established Iris sibirica.

Twenty years ago this yellow shoot was separated and cultivated over many years to check its stability. There has been no reversion. Not unexpectedly micropropagation techniques failed. So this plant has taken a long time to divide and bulk up in numbers ready for this year’s launch at Chelsea.

Fran’s Gold was trialled in the Netherlands at the trial garden Harrie Van Der Laar in 2018/19.

Plant breeders rights were then obtained for the UK, Europe and Japan in March 2020.

To enter Jim & Fran’s new iris into the RHS Plant of the Year competition the RHS rules state that the plant must also be exhibited in quantity on a stand at the Chelsea show and that the plant must not have previously been sold anywhere in the UK prior to Chelsea 2022. After the show there must also be sufficient quantities of stock available for the public to be able to readily purchase it.

Jim & Fran Clarke (with the help of Javado nurseries in Holland) turned to Burncoose Nurseries to stage and enter their new iris at Chelsea on the Burncoose stand in the Great Pavilion. In early May they drove to Cornwall with eight of their new plants in large 12L pots. It was hard to know if the plants would produce flowers in time for Chelsea but we need not have worried. However, getting any iris to flower properly with lots of flowers exactly on time for Chelsea, was not easy. A great deal of care and baking in direct sunlight has been necessary as well as a few sleepless nights prior to the show itself.

Click here for pictures of ‘Fran’s Gold’ growing in Jim & Fran’s garden in Ireland, and the pots which arrived here. The banner of this article if from their garden.