The 21st to 25th of May sees us once again at The Chelsea Flower Show. You will find us in the main pavillion. Stand E16

Below are our final plans for the stand this year. 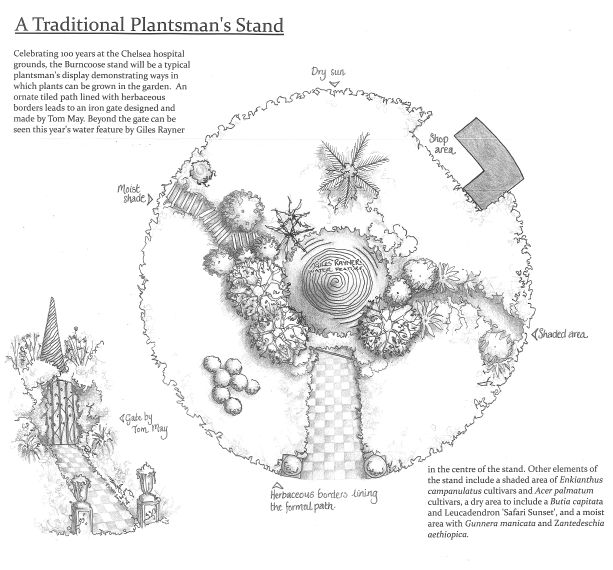 The Burncoose Nurseries’ Traditional Plantsman’s garden is designed to illustrate how a garden exhibit would have been seen in the early days of RHS Chelsea Flower Show.

The garden design focuses on planting styles, fountains and features, plants that appeal to wildlife pollinators and the latest species, introductions and hybrids.

A long, formal, tiled path leads to the middle of the stand, edged with herbaceous borders, topiary and symmetrical planters.

Through the planting the garden team have also drawn particular attention to plants that are pollinated by bees, butterflies, beetles and other insects, such as Anchusa, Armeria, Aquilegia, Eryngium, Sedum and Verbascum.

Burncoose Nurseries has long been acknowledged as one of the UK’s largest and most respected providers of top quality plants by mail order. Over recent years the business has experienced substantial growth through their online ordering facility. Making the most of multi-media platforms, Burncoose now receive more than 80% of total plant orders through their website: www.burncoose.co.uk.

Burncoose’s catalogue and online shop at www.burncoose.co.uk features an enormously diverse range from Abelia to Kolkwitzia and Laburnum to Zenobia. As well as their iconic Magnolias and Camellias there’s also a fantastic range of perennials, shrubs, ferns, trees and plants for specific climatic conditions as well as a number of rarities.

The quality of Burncoose’s plants can be seen in the company’s long history of scooping gold medals from Royal Horticultural Society (RHS) shows. Burncoose employs its own exhibition team and attends major horticultural shows throughout the country – including Chelsea and Hampton Court.

Burncoose is very much the retail side of the Caerhays Castle Gardens, offering the very best of the magnolias, camellias and rhododendrons raised and bred at Caerhays.  The nursery is part of the Caerhays Estate which is managed by current owner, Charles Williams.

The Williams family is also responsible for the creation of one of Britain’s horticultural treasure troves – the gardens at Caerhays Castle in Cornwall. At the turn of the 20th century, the Williams family sponsored British plant hunters to China and as a result the gardens now contain an outstanding plant collection – including more than 450 magnolias that were awarded National Collection Status in 2001.

The gardens and house at Caerhays Castle are open to the public from mid February until the end of May with some free entry for RHS members. Caerhays and Burncoose are also hosts to a series of RHS lectures annually.
Terms & Conditions