A significant architectural discovery on one of Cornwall’s most spectacular estates will help to make any couple’s wedding day an even more treasured memory.

The Caerhays estate, located in a sheltered valley overlooking Porthluney Cove on the south Cornish coast, is equidistant from Truro and St Austell. 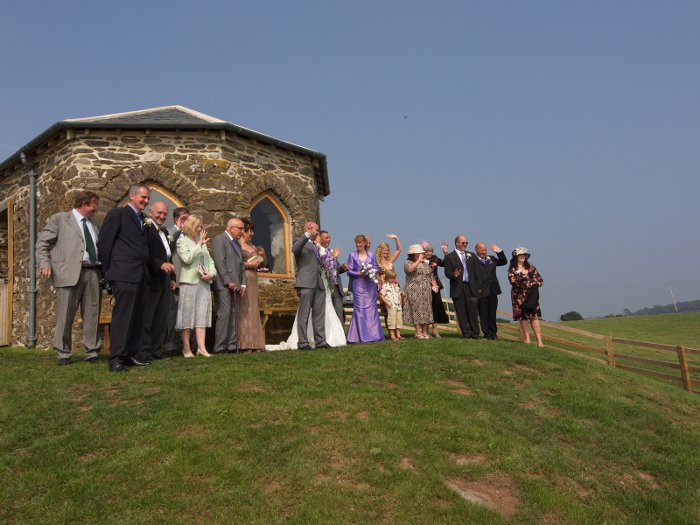 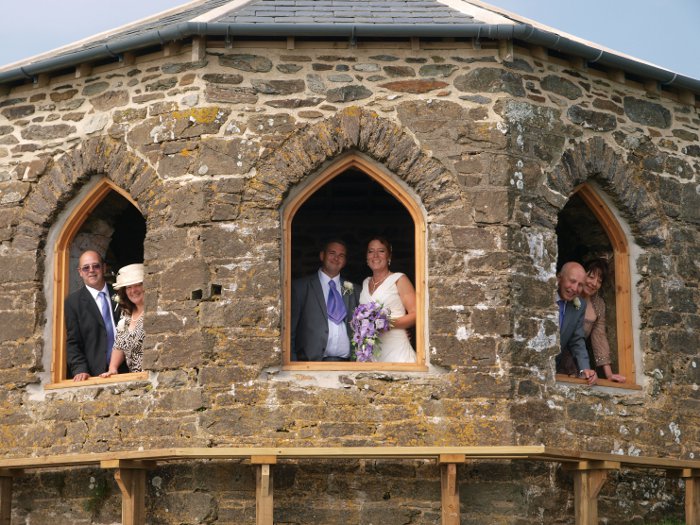 One of the two venues licensed for marriages at Caerhays is the old coastguard’s lookout, high on the headland to the west of Porthunley Cove.

While it is known locally as the lookout, it has now been revealed that the building was designed by the Prince Regent’s architect, architect John Nash* and was built in the 1820s as a banqueting room for residents and guests at Caerhays Castle.

Local people say before it fell into disrepair, it had been used over the years as a coastguard lookout – hence its name.

Now restored and licensed, two weddings have already been held there and five more are booked.

Caerhays marketing manager Lucinda Rimmington believes the history of the lookout and the estate’s other wedding attractions will generate great interest and excitement.

“This discovery adds real significance to the building and to any couple’s wedding day.

“It is a magical building steeped in history with breathtaking views out to sea. It now has a new roof and although you can’t light a fire in the fireplace, the estate carpenter has made removable windows so it is completely dry and even cosy for all the guests!”

An elegant, restored Georgian Lodge at the heart of the estate is the other special wedding venue at Caerhays.

“Couples can be married here, or simply use The Vean for their reception. They can also stay overnight in one of the eight rooms,” said Lucinda. 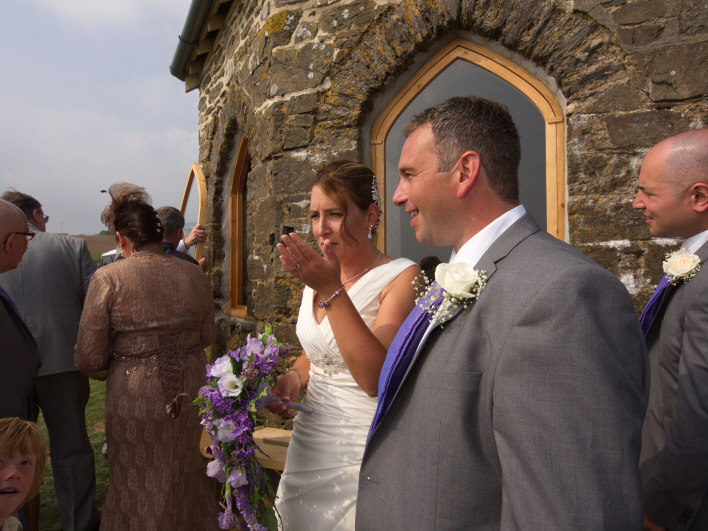 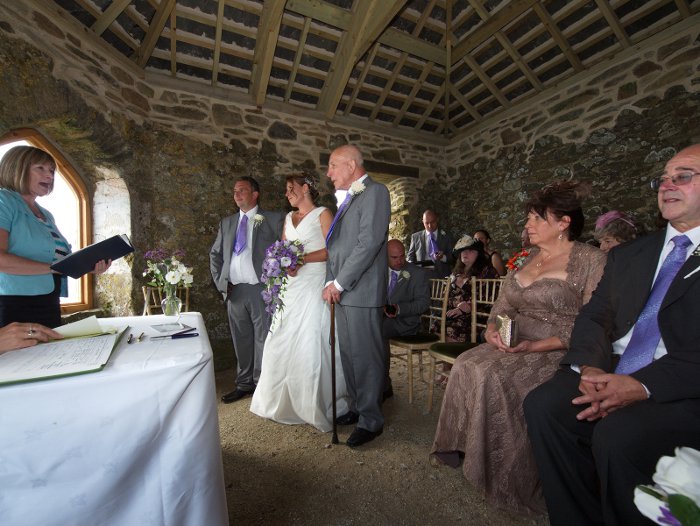 Another feature of the estate is The Cutting, which provides a further option for couples wanting an impressive venue for their wedding reception.

The Cutting was once a natural hill which sheltered the castle from general view and from bad weather coming in from the sea.

In the 1860s, the top of the hill was dug away to provide levelled lawns and to improve views from the castle.

Now it makes the perfect location for a marquee, where wedding guests can mingle and enjoy stunning views of the sea and the castle.

Architectural historian, Stephen Tyrrell, who has researched the history of Caerhays, says the so-called coastguard’s hut was definitely designed by John Nash and that “it was part of the theatrical landscaping scheme for Caerhays, which included a romantic driveway along the cliffs to this banqueting house, with the best views in Cornwall.

“It is a rare building and the fact that it was designed by John Nash makes it all the more interesting,” he said.

Michael and Lara’s wedding was “out of this world”


Michael Levett and Lara Robbins were one of the first couples to be married in the lookout.

Michael, who is the Caerhays estate assistant head gardener, said: 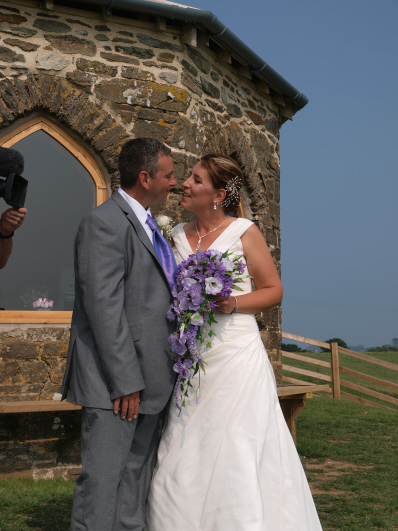 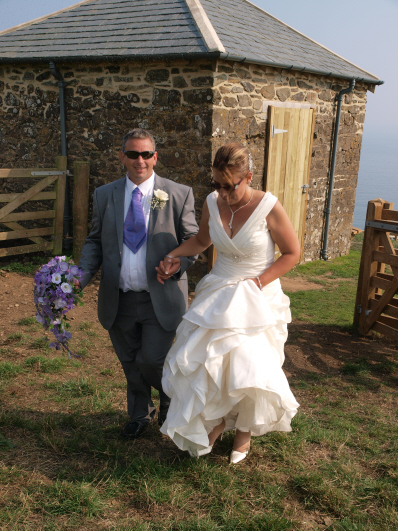 "I have always loved the lookout and had heard that it was being brought online for a wedding venue. I took Lara to see it and said we might be able to use it and she just fell in love with it.”

The sun shone, the sky was blue and the views were endless.

"The guests said it was absolutely stunning and one said even if it had been raining it would still be a fantastic setting.

"Lara was over the moon with the whole thing and with the floral decorations. She hadn't seen the finished article until she arrived."

Getting married in Cornwall's newest and most unusual wedding venue was only part of the whole experience for the happy couple.

Lara had arrived by 4x4 from the Vean. The route involved leaving the road through a gate and crossing a field to the lookout.

The 16 guests were driven in by Land Rover and after the ceremony it was back to the Vean for the reception. 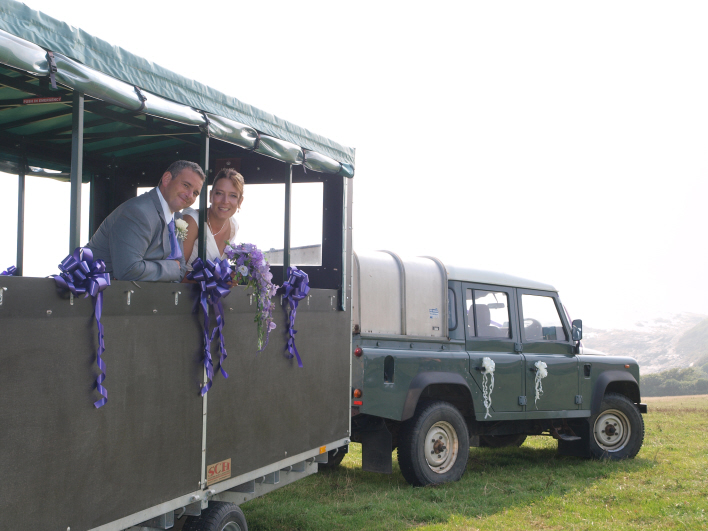 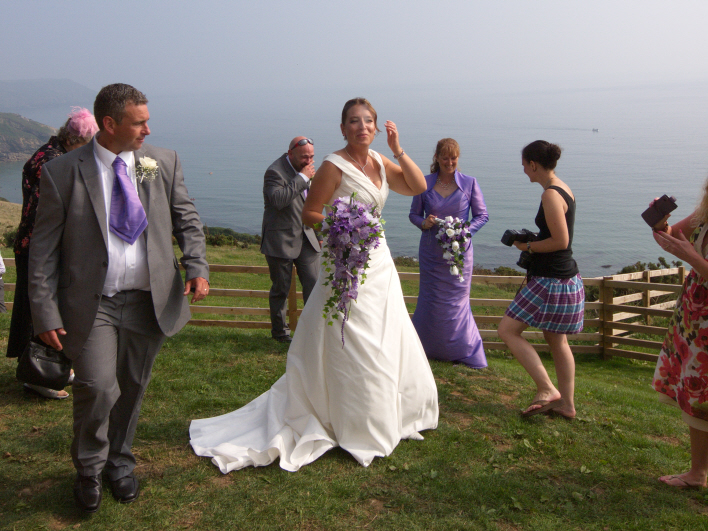 Michael and Lara will treasure the whole day – especially the ceremony in the lookout.

"I would definitely recommend it to anyone who likes the countryside and sea views. It is out of this world as a wedding venue," said Michael.

For more information on Weddings at Caerhays please visit www.caerhays.co.uk or 01872 501310

*John Nash (1752 -1835) has been called the great architect of the Regency period and in his time was one of the most important architects in Britain. The Pavilion at Brighton, layout of Regent’s Park and Regent Street, planning Trafalgar Square and early work on Buckingham Palace are all works of his.

He was commissioned by John Bettesworth Trevanion to design Caerhays Castle, which is the only project of his which survives in Cornwall. 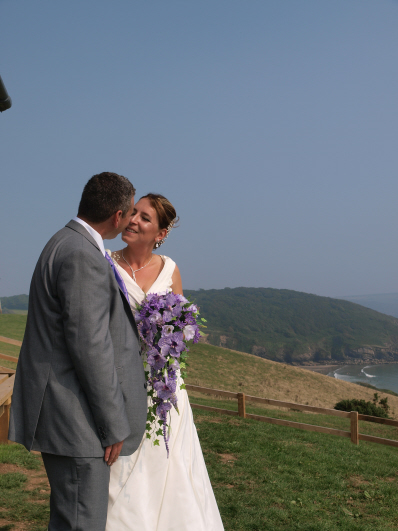 Another feature of the estate is The Cutting, which provides a further option for couples wanting an impressive venue for their wedding reception.

The Cutting was once a natural hill which sheltered the castle from general view and from bad weather coming in from the sea.

In the 1860s, the top of the hill was dug away to provide levelled lawns and to improve views from the castle.

Now it makes the perfect location for a marquee, where wedding guests can mingle and enjoy
Terms & Conditions