'Sacred Flower of the Incas'

This is a particularly beautiful half hardy shrub with arching branches and long tubed pink to purple flowers which are at least 6in long in maturity. Quite a staggering achievement by any small shrub which makes it always in demand in the nursery.

These are evergreen South American plants which can lose most of their leaves in a mild frost and reshoot perfectly well in the spring. If you can risk them outside they are best grown on a bank or above a wall where the flowering branches can hang down. Alternatively you can grow them against a wall with support or up a pillar.

The leaves are lance shaped, hairy and about 2in long. The flowers usually appear in July or August although in a heated greenhouse they can get confused and produce the odd flower rather later in the year if they grow a great deal in a single year. Flowers are either single or in small trusses.

The largest plants we have seen were about 3ft tall and 3ft wide at Ventnor Botanic Gardens but the reference books say they can do rather more than this. In the Burncoose conservatory 3ft x 2ft was the ultimate size.

Full sun and full shelter if you grow these wonderful plants outside. Monthly liquid feeding and an annual pot on if they are indoors.

In the Isle of Wight I saw this plant setting seed for the first time. The seeds were upright and in clusters looking a bit like large cobnuts with a hazel like bract around the seeds. 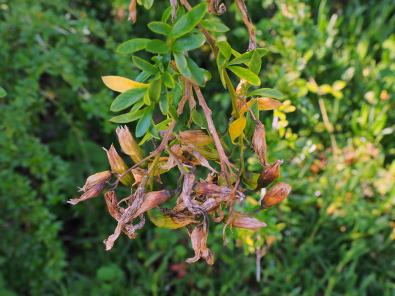 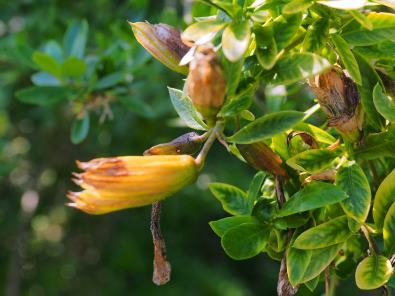 We sometimes offer a rare pure white form of this plant which is equally beautiful. It is in my top five selections for any new greenhouse.