O. carpinifolia grows in the wild in Syria, Turkey and the Caucasus. This genus is closely related to the hornbeams and just as tough with very similar leaves. With the recent arrival of several exciting new species of hornbeam (carpinus) from China this somewhat ignored tree has come back into a degree of popularity and interest with woodland gardeners.

The female flowers appear in O. carpinifolia as pairs of slender catkins. The yellow male 3in catkins appear on the same tree and are more conspicuous. The female catkins however develop into ‘hop-like’ white fruits or ‘nutlets’ in late summer. The seeds are enclosed at the base of those ovate, bladder-like husks which are about ½in long.

This is an excellent and relatively rare specimen tree for a park or arboretum. It grows eventually to about 70ft.

The seeds can be sown as soon as ripe in the autumn in a cold frame and will germinate in the following spring.

In my ignorance I have once or twice mistaken this large tree as a species of elm. I guess the leaf form makes this not too bad an error. One you will not make, however, once you see the ‘hop-like’ fruit clusters which hang on after the leaves. Then you will probably mistake an ostrya for a carpinus which is not that big an error either! Such is the fun of tree identification and gardening generally! 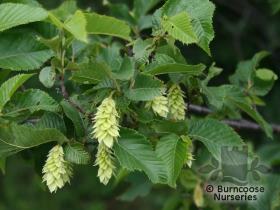 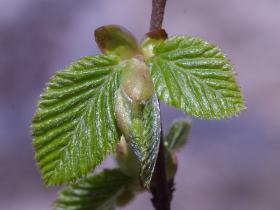 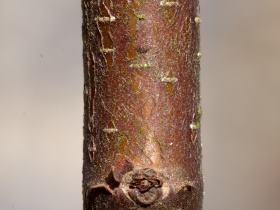