Dormant grape vines, whether bare root or pot grown, should be planted in early spring. They need support to grow properly. This can be in the form of a trellis or wires on a wall or, more conventionally, on a purpose built post and wire frame. Vines should be spaced between 6 and 10ft apart.

Most grape varieties are self fertile but you should check that yours is before you start. Otherwise you will need to plant at least two different varieties together to be sure of producing grapes.

Planting vines outdoors requires a position with full sun for most of the day. Newly planted vines may need additional water in dry spells, but these are deep rooting plants which require a good depth of loose loamy soil. Plenty of well rotted dung or leaf mould in the initial planting pit is a good idea and a mulch over the plants’ roots is ideal. Placing gravel or slate slabs over the roots can achieve the same effect.

In many hundred year old greenhouses you find that the vines have been planted with their roots outside the glasshouse but trained up on the inside. There are two key reasons for this. Firstly grape roots need to have a month or so at cold or near freezing temperature during the winter to encourage the production of the maximum amount of fruit. Secondly the vines will need no watering inside the greenhouse and virtually none outside either.

This is of crucial importance since good airflow and not too much humidity is important in avoiding powdery mildew on the leaves of your grapes. More important still is that the air flow around your grapes is kept moving. This will prevent the fruit rotting off or getting diseased.

Ventilation of your greenhouse is therefore the key to successful grape growing. Do not damp down the floor during flowering or when the fruit has formed.

When vines are planted in the ground or in large pots indoors they will need frequent watering but this must be done only at ground level and not over the leaves. Do not top mulch an open bed with rotted manure as this will encourage too much growth and less fruit. When preparing the bed before first planting you can incorporate all the compost that will be needed for many years thereafter.

Pollination occurs naturally and mainly on the wind outdoors. Indoors you may well have to give your grape flowers a gentle shake to spread the pollen within and between them.

High potash feeding (ie tomato feed) once a week in the growing season will assist vigorous growth but you should desist once the fruit starts to form.

Once the bunches of grapes begin to form you need to remove about one in three grapes per bunch with a pair of scissors. This improves air circulation and allows you to cut out any smaller or misshapen grapes so the plant then puts all its energy into producing a uniform crop. You may need to do this several times as the grapes develop. Always remove any individual damaged or diseased grapes to avoid future problems.

After harvest continue to ventilate the greenhouse as many grapes need a proper period of dormancy. You can assist this by gradually removing the leaves to expose the branches to bright sunlight.

In the first couple of years after planting your vines should be allowed to establish their root systems without flowering.

Concentrate on growing two main laterals, tie in and wind carefully around your support wires.  Removing ALL side shoots, flowers and tendrils.  It's hard to do but you will need patience.  The same applies if you are repruning or tidying an old un-pruned vine like the photo below.  Cut everything back to 2 laterals and work with them.  In the photo below there are two new laterals, and we have kept a spare third incase one breaks as we start to train them.

In the third year allow 2 spurs per bud to grow, and remove everything else. Support these spurs as they grow. When the vine flowers remove all but three flowers or three bunches of forming grapes on each spur. Once summer is in full swing, remove the leaves surrounding the bunches so they have maximum light, although direct sunlight on the grapes is not necessary for ripening. Note there are 2 bunches per spur.    At the end of the season cut the spurs completely back to your main laterals. 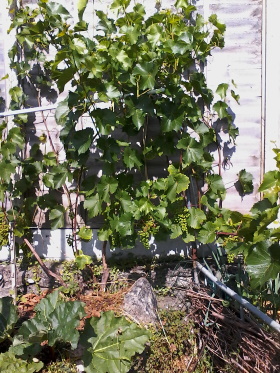 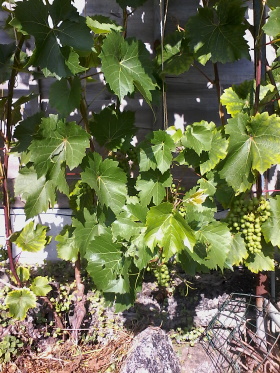 Vine with 2 spurs per bud - before leaf pruning 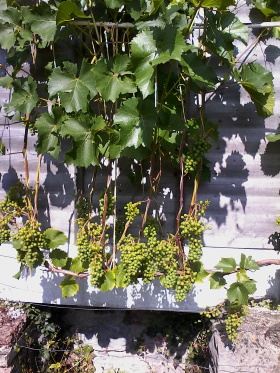 Vine with 2 spurs per bud - after leaf pruning

In year five perhaps leave  four to five spurs from each bud and five to seven bunches of flowers.

Grape vines ONLY fruit on new growth so winter pruning is essential to remove the old shoots. You should cut out 90% of the previous season’s growth back to a couple of growth buds. The more you prune the more grapes you will have! In more mature vines you need to remove and tidy all side shoots on your trellis leaving plenty of room for vigorous new growth each season from one key leader on each support line.

When cutting back you need to ensure that the old canes are tied in to their supports. Similarly, as the new growth develops, this too will need to be carefully tied into the trellis usually laterally to the plant so that the grapes can hang down freely without touching anything that could damage them as they swell and develop.

As well as training in the new shoots to the trellis you can also pinch out side shoots and secondary new growth. This is an ongoing job in May and June.

We have talked about fruit thinning indoors but you may well want to reduce the number of bunches of grapes on your vines in the garden too for the same reason.

So there is some pruning of grape vines required in each season for the best results.

Grapes are ready to pick when they feel soft to the touch and taste sugary. If you feel that your grapes are slow to ripen pinch back some of the leaves to let in more sunlight.

Harvesting is normally in late summer or early autumn depending on the variety. Grapes do not continue to ripen once picked.

Grapes can be stores for about six weeks in a cellar in crates or boxes lined with straw or sawdust. You will need to check them frequently to remove any individual grapes which shrivel or rot in the meantime.

Vitis not quite ready to harvesting

Vitis not quite ready to harvesting

All the varieties of black, blue, green and yellow grapes which we offer are fully hardy and well established as reliable fruiters in the UK conditions. In the nursery ‘Muscat of Alexandria’ and ‘Black Hamburg’ have produced edible grapes in their first season while still in small deep pots. We should, of course, have removed the flowers if we had stuck to the rules outlined here!

They can also be grown in a greenhouse or outside. The problem with growing them in greenhouse is that the plants get so large and want such special treatment that there is little room for growing anything else.