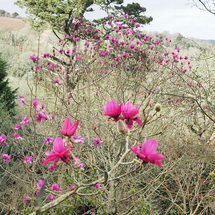 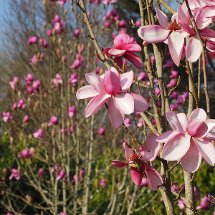 A stunning new magnolia with pure white seven-inch long flowers which open perfectly flat but then turn sideways or downwards. Flowers are suffused pink at the base. Very slow growing
Click to view more details >

Huge flowers which are dark purple outside and nearly white inside. One of the very best newish magnolias at The Valley Gardens near Windsor
Click to view more details >

Another impressive new hybrid bred by Ian Baldick in New Zealand. This has a globular upright reddish-purple flower which is another 'must have' for any serious collector
Click to view more details >

From the same cross that produced M. 'Star Wars'. Many feel the flower colour is better and the flowers are larger. Branches have a drooping habit
Click to view more details >