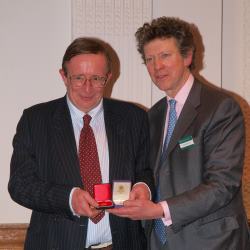 Charles Williams of the Caerhays Estate was awarded the Victoria Medal of Honour (VMH) in Horticulture by the Royal Horticultural Society (RHS) at an awards lunch at Lindley Hall in London yesterday.

The VMH in Horticulture was established in 1897, with the assent of Her Majesty Queen Victoria, to enable the RHS Council to confer conspicuous honour on those British horticulturists whom it considers deserving.  The medal is awarded for life, and only 63 medals may be held at any one time in recognition of the duration in years of Queen Victoria’s reign.

Sir Nicholas Bacon Bt OBE DL, President of the RHS said, “The RHS Awards are a reflection of both horticultural excellence, personal endeavour, and a passion to succeed.  They are regarded internationally as being amongst the highest horticulture distinction”.

Mr Williams is the owner of the Caerhays Estate which includes Burncoose Nurseries and an RHS Judge and Lecturer.  Following the presentation of the award he said, “My love of plants and horticulture is really that of an amateur.  It is the plants themselves which are the professionals!  Amateur or otherwise I am delighted to accept this wonderful honour from the RHS on behalf of Caerhays and Burncoose and all those who work there”.

Home to a National Magnolia Collection, Caerhays is a world famous magnificent Cornish Spring garden best viewed between March to June, with spectacular displays of rhododendrons, camellias, azaleas and magnolias. The 140-acre English Heritage Grade II Listed woodland garden is made up of origins of made up of origins of this historically important collection of Chinese plants can be traced back to the work of the great plant hunters Ernest Wilson (1876 - 1930) and George Forrest (1873 - 1932), both of whom received the VMH themselves!

The VMH is a medal which is limited in number by the Royal Horticultural Society and awarded to those in recognition of their services to the horticultural industry.  You can read more about the medal here on wikipedia.