If you are keen on growing styrax to extend the flowering season into summer in your woodland garden then this is another welcome addition to the collection. Pterostyrax are also members of the styracaceae family along with halesia and styrax themselves.

P. hispida is a 15-20ft shrub with a single leader or, more commonly, with multiple shoots from the base of the leader which turns this plant into a clump. The leaves are oblong to oval, light green and covered with a whitish down. The flowers appear in June or July and appear as long downy panicles of white flowers sometimes with two or three leaves at the base. The panicles make a fine show and are 4-9in long. These are followed by spindle shaped five ribbed fruits 1/2in long and clothed in yellow-brown bristles.

This is a native of China and Japan and likes a similar position in dappled shade to its styrax relatives. It flowers and seeds most profusely after a hot summer and this is when its fruits are most likely to be fertile. A rich loamy soil is ideal.

P. corymbosa is a native of Japan and is very similar to P. hispida in many respects except that its fruits are wider and have five wings (not five ribs) and are covered with down rather than being hairy. The leaves are also smaller and more ovate but the flowers are very similar.

Both species can be grown from semi-ripe cuttings or from seed. They are trouble free but we have found that the offshoots at the base can blow out in strong winds and that staking younger plants is a good idea. 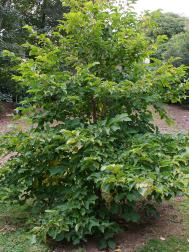 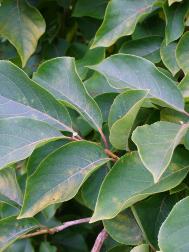 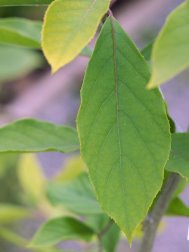 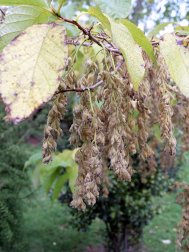