This news article is from our news archive, details may be out of date - thank you.
We were thrilled to hear that the Rhododendron, Camellia and Magnolia Group has won a Silver-Gilt Medal at the Chelsea Flower Show!

Pam Haywood from the Group says:

This is an amazing achievement and reflects all the hard work put in by Sally Hayward and David Millais to plan the exhibit, and the combined efforts of Sally, David & Andy and Jenny Fly to build the stand and lay out the plants so carefully.

We are also indebted to the Royal Botanic Garden, Edinburgh who have entrusted us with some of their most precious vireyas for the duration of the show. Her Majesty the Queen visited the exhibit yesterday afternoon and was presented with a bouquet of rhododendrons which she can be seen with on the cover of today's Daily Telegraph and Daily Express. 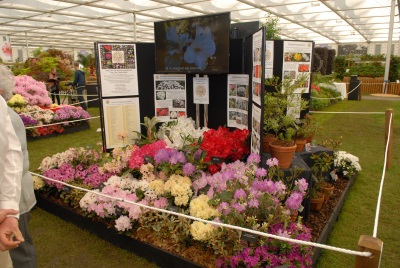 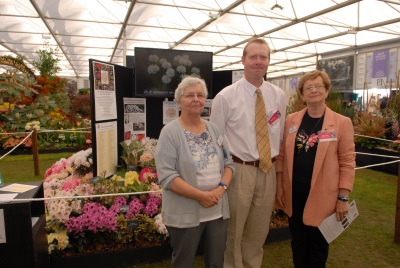 What better endorsement for a 'rhododendron revival' could we ask for! Thanks to all who have played a part in this, not forgetting the Top 100 participants! The Rhododendron yakushimanum image kindly supplied to us by Jennifer Lu is attracting a great deal of attention and having the 'real thing' forming part of the scene is truly inspired. The Queen instantly recognised our favourite rhododendron and spent some time talking to Sally about it.

In addition our three associated stands: Burncoose Nurseries, Hillier's and Millais Nurseries all won Gold medals, so congratulations to them too!
Return to Chelsea 2016 details
Terms & Conditions